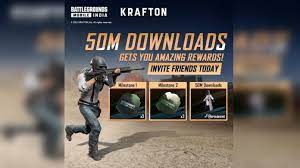 Battlegrounds Mobile India is celebrating Independence Day with an in-game event titled ‘Independence Day Mahotsav’. It is currently underway and will run through August 20 with daily rewards. The game has crossed 49 million downloads since it became playable in mid-June, another step towards its 50 million downloads goal. Additionally, developer Krafton has once again teased the iOS release but with no date. It has also shared client patch notes for the latest patch that address some of the issues in the game.

With Independence Day on August 15 just around the corner, Battlegrounds Mobile India developer Krafton has kicked off its Independence Day Mahotsav wherein players will get daily rewards for logging in till August 20. On the last date, all players will be rewarded with an AWM sniper rifle skin. Some of the other rewards include in-game currency, Classic Crate Coupon Scrap, Green parachute trail, and a Supply Crate Coupon. There are also new missions that are unlocked every day.

Krafton has also once again teased the iOS launch of Battlegrounds Mobile India on Instagram, asking fans to share their love for “apples”. The developer had also previously teased the game’s iOS launch on Twitter. Both teasers are without a date, though the game is expected to hit iOS devices within this month.

Lastly, patch notes for the August 10 patch were recently updated on the website and it addresses a few issues that players were facing in Battlegrounds Mobile India. These include aim effect issue with the Ancient Snake skin DP28, Arcade Mode melee issues, characters hiding in containers, characters getting stuck in the assembly line in the factory, and some more. It also updates some timelines for things like Royale Pass M2 that starts on August 13 and ends on September 17, C1S1 schedule that will end on September 16, C1S2 that starts September 17, and more.